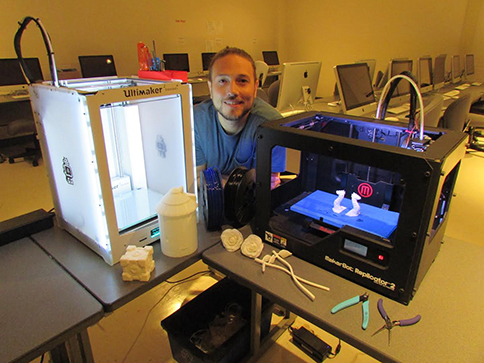 The UWIN_3D Print Club has been in operation since the beginning of April 2016. During this time, they have held various workshops and events that focused on best practices and basic usage in 3D modeling, 3D Scanning and 3D printing. Some highlights included learning how to make club rings and basic 3D characters, as well as scanning objects and translating them into printable files.

More recently, the club has become fully ratified as a University of Windsor Students’ Alliance (UWSA) Club. This was an important step for the club’s longevity as well as to further define the club’s presence on campus. To our knowledge, UWIN_3D Print is the first club to offer 3D printing services to the entire student body! They have also ventured off campus for special events and partnerships such as the 3D Selfie Booth which was funded in part by Hackforge and was held during the WAVES Festival downtown, as well as their current partnership with the Chimczuk Museum to print off 25 3D puzzle mammoth skeletons for use in their kids educational programming during their new Ice-Age Mammals exhibit that runs from now until the end of December.

These external partnerships are crucial to their growth as they allow the club to create public awareness about 3D printing and the UWIN_3D Print Club as well as to foster new relationships between the public and UWIN_3D Print.

To date, 64 members have signed up, 11 of which are from St. Clair College. They have been, and continue to, print off objects at every club meet-up, which demonstrates a need for a campus-wide 3D printing service, as well as a need for a common ground for students to engage with innovative technologies. Some highlights include:

These are just a few, the remaining projects from University of Windsor and St. Clair College students can be found on their weekly blog at www.uwin3dp.com or on Facebook at https://www.facebook.com/groups/uwin3dp