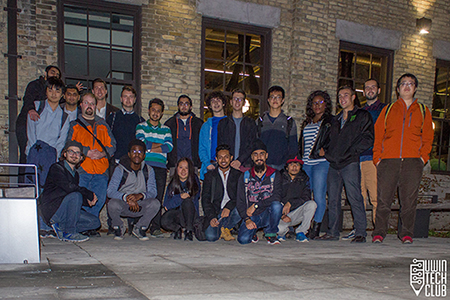 The UWin Tech Club recently travelled to Waterloo for a tour of the start-up community. They attended the Velocity Fund Finals, a competition for student start-ups at the University of Waterloo, where students pitch their start-up ideas for a chance to win $25,000 in funding. They also attended Communitech and the Velocity Garage, which provides office space and resources to local start-ups. Lastly, UWin students were the first group ever to receive a tour of Google’s new office which had just opened the previous week.

The event was geared towards students interested in the tech start-up scene in Ontario. It was designed to inspire University of Windsor students and grant them the opportunity to network with various start-ups, meet other student founders and learn about what it takes to pitch a real start-up business to investors. The UWin Tech Club sent approximately 25 University of Windsor students and an additional five high school students from the Windsor-Essex community. EPICentre made the trip possible by providing the transportation to and from the event.

The UWin Tech Club’s goal is to promote and facilitate the growth of small tech start-ups on campus. They believe that students at UWindsor are just as talented as those in Waterloo or Silicon Valley but don’t necessarily have the environment to foster their dreams. To develop this environment, they follow a three step process as detailed below:

2) Provide the means – Give promising students the resources and put them in an environment where they can make their ideas into real businesses. Just this past semester we were able to put together an initial team of students who were able to develop a mobile app for our local Chamber of Commerce. Our second group developed a web mapping service, which uses crime data in Detroit to promote commuter safety; it basically suggests alternate routes to avoid high-crime areas. This current semester, they are partnering with a pair of Kinesiology professors to design an application for health care workers based off of their research.

3) Making a dream a reality – Students can take their start-up business ideas to partners such as EPICentre and the Downtown Business Accelerator, where they are provided with further resources and are able to the take their business to the next level. The overall goal of the UWin Tech Club is to ensure that students will have the knowledge, skill set and exposure to the local tech scene and encourage and support members entrepreneurial aspirations.

Highlights from the trip

One major eye-opening insight for a lot of the UWin Tech students in attendance was the fact that a lot of entrepreneurs were also students who were running established, successful businesses while still in school.

Another highlight was the visit to the new Google office in Waterloo. Paul Meyer, a UWindsor alum and current software engineer at Google, made this possible.

UWin Tech Club members were also looking to see what makes Waterloo such an innovative hub. Osama Khurshid, the executive VP for the UWin Tech Club, said “it was the environment that fostered the entrepreneurial enthusiasm in students. Students viewed the idea of starting a business while studying as an expected norm.” Ultimately, the UWin Tech Club wants to bring this entrepreneurial environment to Windsor and encourage more students that they can start their own businesses even while studying.

Plans For The Future

The UWin Tech Club is currently trying to organize a similar trip for the Winter semester and have students travel to the Silicon Valley area in the San Fransisco Bay area. They currently have tours set up through UWindsor alumni with Google and Facebook in Silicon Valley. They are also planning on visiting the Computer History Museum, the NASA Ames Center, the San Jose Tech Museum and the Stanford University campus. Other potential locations the Tech club is working towards include Apple headquarters, PayPal, Cisco, Samsung and a variety of other tech giants.