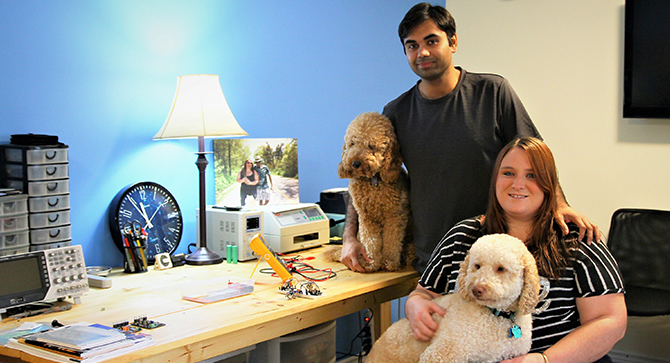 Picture the following scenario: You’ve let your dog or cat outside into the backyard but didn’t realize the gate had been left open. The next thing you know, you’re searching the streets in the middle of the night looking for your wandering furball. Luckily, a new solution to locate your pet is on the way thanks to new EPIC Fall Founders Kaushik and Charrie Ray.

Kaushik and Charrie are currently in the process of developing technology to assist pet lovers. Kaushik has an Electrical Engineering degree and a Masters of Applied Science degree from the University of Windsor. Charrie is a graduate of Oakland University with a Bachelor of Science in Biology.

Kaushik originally heard about EPICentre from a former member who approached Kaushik to assist him with developing a product. Ever since this happened, Kaushik has wanted to build his own business and become his own boss. He started to brainstorm various ideas for a business and had originally wanted to sell and market leather purses.

After partnering up with Charrie, however, they decided to focus on something that aligned with their passion for pets! Kaushik and Charrie have rescued a number of cats and they also own a dog. After welcoming the new dog into their family, Kaushik and Charrie realized that their cats would disappear from time to time due to their understandable fear of dogs. One of their cats eventually vanished without a trace as it had been picked up and brought to the Humane Society. Further, their dog has also been known to take off running on occasion. Kaushik and Charrie came to the conclusion that it would be extremely helpful to track their pets to avoid these situations.

After identifying the problem and working on a solution, Kaushik and Charrie are now members of EPICentre’s Fall Founders Program and working on developing new, affordable technology that will aid pet owners in tracking their pets called PawPrint, a Pet Tracker unlike any other found on the market today. In hopes of keeping their pets safe and accounted for, they are diving forward on this new excursion to improve the way we find and care for our pets.

After conducting a competitive analysis, Kaushik and Charrie concluded that the current products on the market rely too heavily on cellular technology, which requires being in an area that is serviced. Further, current products that use radio signals are very expensive. Now, Kaushik and Charrie are creating and designing an inexpensive new device that will focus on long-range radio signals that will be 1/4 the cost of current technologies in the market.

Some advantages of this new technology will feature long-range radio signals that will have a 500-metre radius in the city and 2-kilometre range in open areas. The product will not rely on mobile data or wi-fi as it is using a new technology that is not widely available in the market. PawPrint will send a radio signal from the device worn by the pet to the consumer’s device (i.e. tablet, smartphone, etc.) via Bluetooth technology and the consumer would then use an app on their phone to monitor their pet.

Kaushik and Charrie are currently in the product development stage and hopeful that they will have a prototype ready by the end of November 2017. They are currently using funding from EPICentre’s Fall Founders Program to develop the prototype. Once the prototype is built, they plan on having specific, targeted individuals test the product so they can receive feedback and make improvements (i.e. device size, interface of the app, how well it works, etc.).

Kaushik and Charrie are also taking advantage of business mentorship provided by EPICentre to determine an appropriate pricing model and obtain advice on how to effectively market the product once it’s ready.

Stay tuned for more updates on Kaushik and Charrie’s entrepreneurial journey as they continue to develop PawPrint!

If you are interested in becoming an EPIC Founder, be on the lookout for our summer program, starting in May 2018. Applications will be available in early January 2018! If you have any questions, please contact us at epicentre@uwindsor.ca!