Mike Murad of Pursue Sports, currently one of EPICentre’s incubator members, recently met with Prime Minister Justin Trudeau during a recent trip to England. Pursue Sports is an athletic recruitment company that uses a numeric ranking system to rate soccer players. The company offers comprehensive athlete profiles through the analysis of data gathered through a process of rigorous testing. The process allows the athletes interested in international playing contracts to be tested close to home rather than travelling internationally for team tryouts.

The majority of Pursue Sports’ clients are in Europe but also in Canada and the U.S. Mike currently has 21 current employees with 8 based in Windsor and 13 employees in Europe. He also has two offices overseas located in Manchester and London, England.

On a recent trip to England, Mike was able to meet the Canadian Prime Minister. Mike had this to say about his meeting with the PM, “Meeting the new Canadian Prime Minister Justin Trudeau was amazing! I met him in England where myself and 25 others were invited to a reception to meet Justin Trudeau. Luckily I had a chance to take a “selfie” with him. I was invited to this particular reception due to the amount of business I conduct with British, U.S and Canadian governments. I was seated next to the director of LinkedIn as well as a French Ambassador, which was an honour in and of itself.” 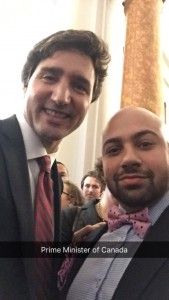