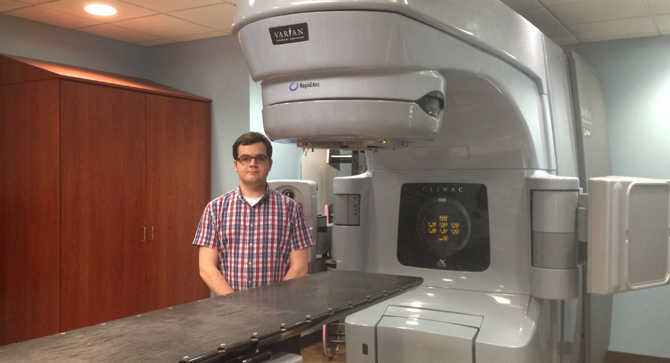 Solving problems in the medical industry can be extremely difficult given the cost of the equipment involved but Samuel Rusu, one of EPICentre’s newest founders, has identified a problem that he believes he can solve through his new startup, Rusu Medical.

Samuel Rusu is a recent graduate of the University of Windsor’s Medical Physics program and he is currently pursuing his Masters in Medical Physics at Wayne State University in Michigan. Before coming up with his idea, Samuel had always been interested in running his own business since he was young. He would purchase items at garage sales and then sell those items for 2-3 times more than what he paid. He has also always been interested in business but decided on the Medical Physics field for his undergraduate education since this was something he has always been passionate about. He recognized that he possessed the skills to do this and could pick up the business side while he was studying physics. He eventually enrolled in an Intro to Entrepreneurship course at the University of Windsor where he was first introduced to the EPICentre.

During his summer employment at the Odette Cancer Centre at Sunnybrook Hospital in Toronto, Samuel identified some issues with respect to the calibration of Linear Accelerator machines (LINAC), which are used to treat cancer patients who are receiving radiation therapy. Having worked closely with some of the medical physicists and technicians, he realized that one major issue was with respect to the calibration of these machines. It took a great deal of time to properly calibrate them and is not an efficient process.

There are currently two ways to treat cancer patients using radiation therapy.  Typically, patients are treated with photons because of the skin-sparing effect and they interact with the individual’s tissue to produce electrons. A LINAC machine is used to produce either electrons or photons by accelerating electrons at very high speeds. These are then delivered to the patient through the machine but a large amount of planning is required as each patient will have different needs based on their condition. This aspect of the treatment requires calibration and human interaction to ensure proper treatment for patients. The LINAC machines have to be calibrated properly because, if not, they can actually harm the patient rather than help.

After talking with the individuals who operated the LINAC machinery on a daily basis, Samuel came to the conclusion that calibrating these machines was both time-consuming and inefficient. He also identified that before delivering a plan through these machines for patients, there was a lot of items that had to be tracked in order to ensure that the proper treatment was given.

Currently, Samuel is working on a prototype, called RadAuto QA, with respect to the calibration component of these LINAC machines. The goal is to significantly reduce the time required to calibrate the machines which would allow for the technicians and physicians operating them to make better use of their time and allow them to focus more on their patients.

The LINAC machines have to be calibrated on a daily, monthly and annual basis. While solutions are already in place with respect to daily calibrations, Sam has decided to focus on the monthly calibration issue. He is currently developing the software and plans on testing it out by the end of the RBC EPIC Founders Program in early August.

Sam’s original idea was to create both a hardware and software component but is currently focusing on the software side right now with the hardware development to begin in 6 months to a year from now. The software is essentially going to allow the machine to follow a specific protocol and analyze the results automatically, a solution that would significantly reduce the time needed interacting with the LINAC machine. Once both hardware and software prototypes are tested and finalized, Sam would then market the product as an all-in-one solution for LINAC operators.