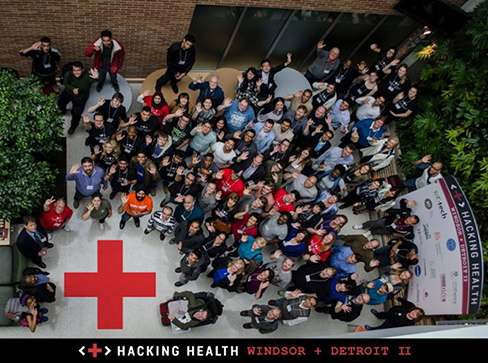 On May 13-15, the University of Windsor hosted the second annual Hacking Health Windsor-Detroit at the Toldo Health Education Centre, an event that breaks down barriers to healthcare innovation by bringing together IT and healthcare professionals across the US-Canada border to collaborate, dream up & design apps for patient-centric care. The event was organized by WEtech Alliance, TechTown Detroit and EPICentre. A recap video from the event can be found below:

This year, there was a total of 230 hackers making up 39 teams designing applications for patient-centric care. The following infographic further illustrates the success of the event: 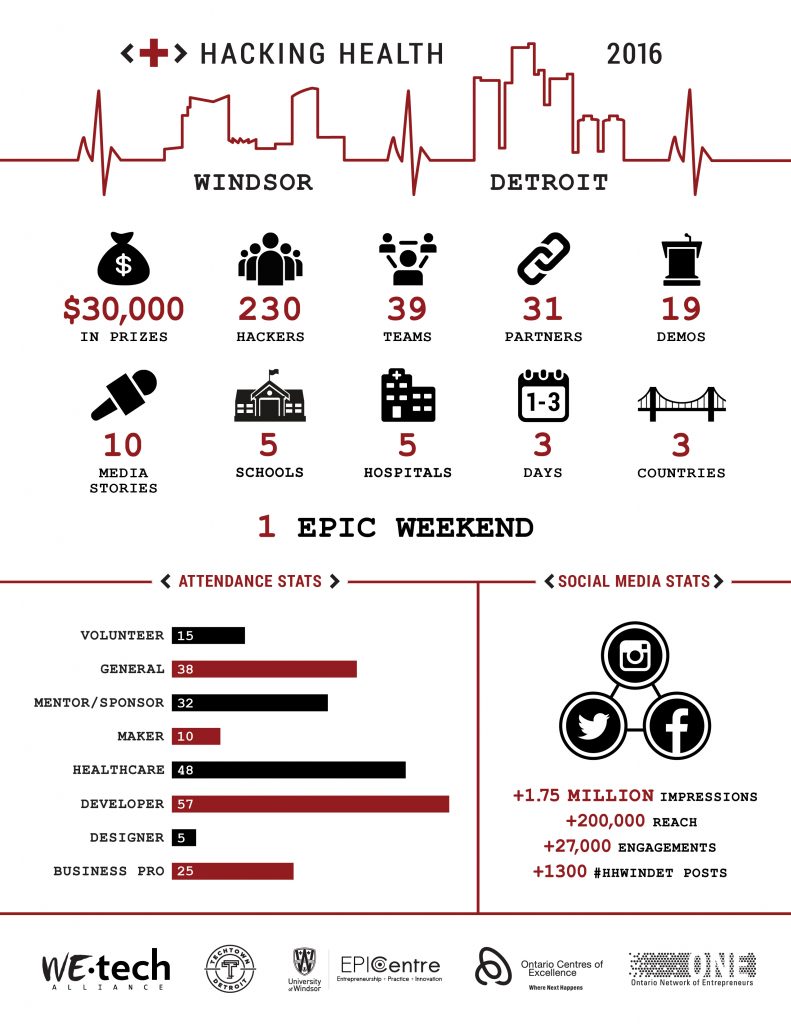 A team of ambitious young entrepreneurs from Sheffield, England also joined the process courtesy of Skype technology and a webcam. Helping pitch their idea on the Canadian side was Connor Paterson from the University of Windsor’s World Health Innovation Network and EPICentre’s program coordinator, Taylor LaPorte. The Sheffield group was looking to better coordinate food distribution to the homeless in England but also curious about potential Canadian and U.S. markets for their futuristic app.

Here is the final list of Awards, Prizes & Winners from Hacking Health Windsor-Detroit 2016:

2. Overall Judges Favorite – Powered by the Detroit Chamber of Commerce. The winners received free registration to the 2017 Mackinac Policy Conference and ten (10) hours of consulting valued at $5000.

3. Best Caregiver/Patient Management Application –  Powered by Dykema Gossett PLLC and Ann Arbor Spark. The winners received up to $10,000 in legal services and six (6) months of virtual tenancy valued at an additional $500.

4. Best Clinical Application or Solution – Powered by Ann Arbor Spark. The winners received one (1) team spot in the SPARK Entrepreneurial Bootcamp plus a $1000 stipend (for a total value of $2500)

7. Best Team from Canada – Powered by the Downtown Windsor Business Accelerator and WEtech Alliance. The winners received six (6) months of incubation space and mentoring valued at $5000.

8. Best Team from US – Powered by TechTown Detroit and Junction 440. The winners received a free registration for DTX Launch Detroit and three (3) months incubation at Junction 440 valued at $8000.

For more information on the teams and projects, please visit: http://hhwindsordetroit2016.sparkboard.com/projects