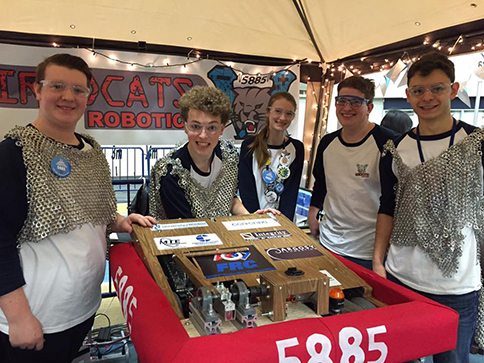 Combining the excitement of sport with the rigors of science and technology, the FIRST Robotics Competition is the ultimate sport for the mind. High-school student participants call it “the hardest fun you’ll ever have.” Under strict rules, limited resources and an intense six-week time limit, teams of 20 or more students are challenged to raise funds, design a team “brand”, hone teamwork skills, and build and program industrial-size robots to play a difficult field game against like-minded competitors. Volunteer professional mentors lend their time and talents to guide each with each season ending with the FIRST Championship, which will be taking place in St. Louis, Missouri from April 27th – 30th. 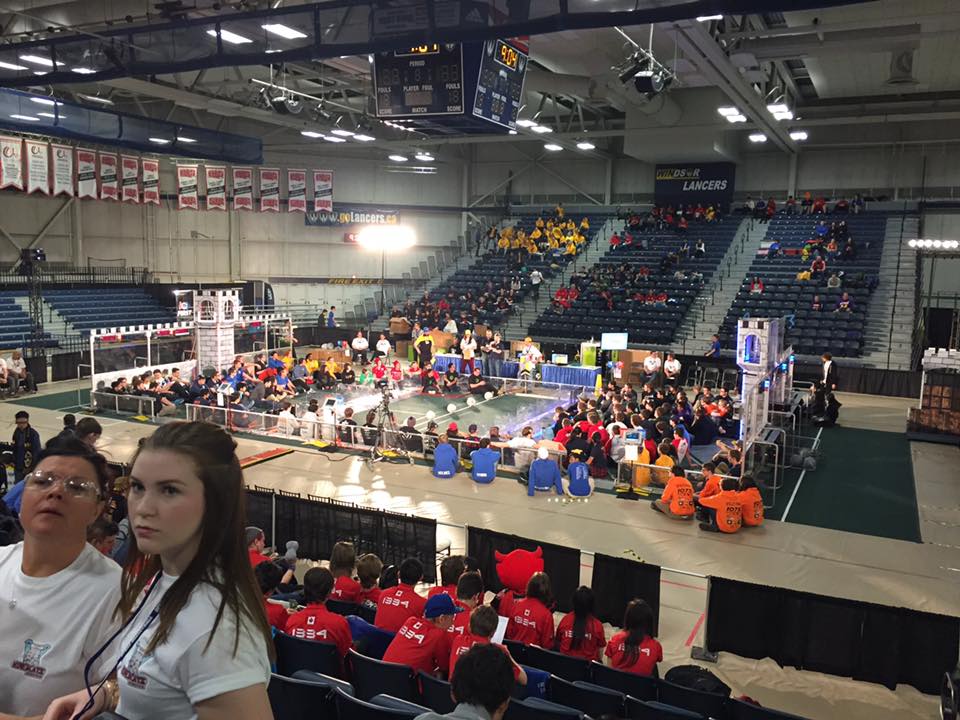 Each year, the theme of the competition changes. This years theme went back to medieval times and introduced a Stronghold game. For more information about the game itself, check out the video below:

Two of EPICentre’s current members, Bob Hedrick and Chris Burford, were approached by the Villanova WiredCats  while visiting a ‘practice’ FIRST event hosted by the Sandwich Sabres team at the St. Denis Centre. Bob and Chris were more than happy to volunteer their time as mentors and joined the Villanova team to assist with the control programming aspect. The team was made up of 28 students, 16 boys and 12 girls, as well as other mentors in electrical and mechanical engineering, design, programming and business. The team had a total of six weeks to build their robot and were only provided with a starter kit. They were also tasked with putting together a business plan, including a website and social media. The team also had to do some fundraising to cover the associated costs of the competition.

Being a rookie team can certainly have its disadvantages but the Villanova WiredCats team was ready for the regional competition with their robot named Patches. During the qualification round, each team is ranked accordingly and the top eight teams then choose which teams they want to pair up with for the finals, with each team picking another two teams to bring with them. 24 teams ultimately make up the final round. While this may seem unfair, it teaches the kids the importance of networking with their peers and adds a social element to the competition. The Villanova WildCats ultimately ranked 13th overall but were not picked by the top eight teams and were unfortunately not one of the teams picked for the finals. 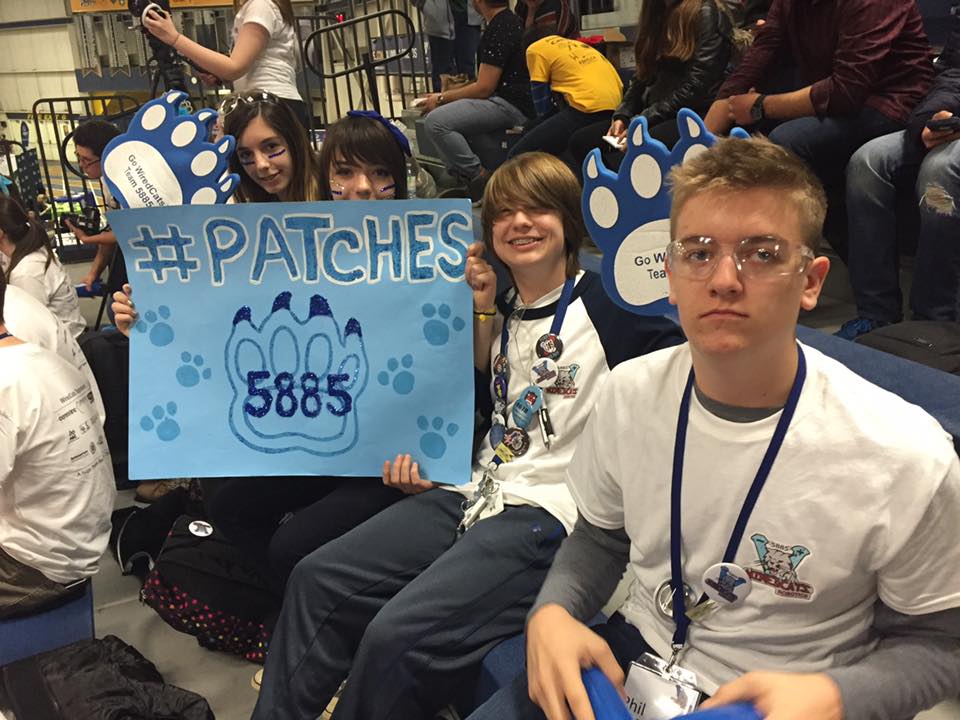 The WiredCats team was disappointed with this outcome but that disappointment was turned to joy when the team was selected as the recipient of the Rookie Allstar Award. There were 16 rookie teams competing in the competition with only one of the rookie teams taking home this award. This also granted the Villanova WiredCats with an automatic entry into the World Championships where they will compete on the world stage. 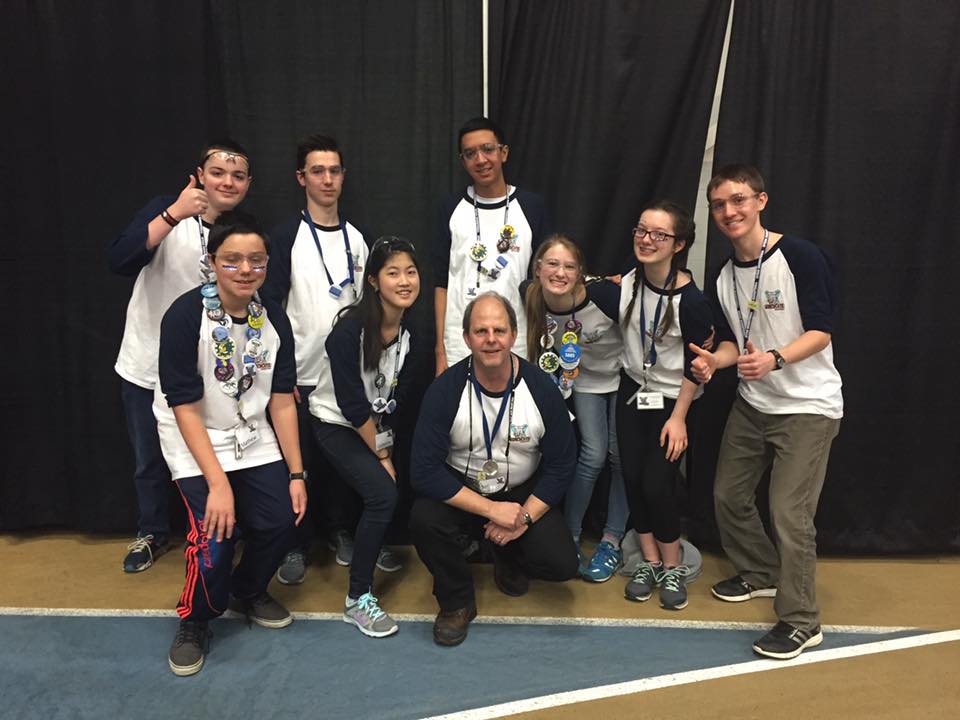 Hedrick and Burford were blown away by all of the hard work and dedication from the team. “Seeing the kids mature and just being able to sit back and watch them take the reigns during the regional competition was an amazing thing to see,” said Hedrick. The team is now on its way to St. Louis for the World Championship which takes place April 27th – 30th. Be sure to follow their journey by checking out their website and social media pages:

Bob Hedrick and Chris Burford are members of EPICentre and represent CAMufacturing Solutions, Inc. They provide over 50 years of combined manufacturing and systems engineering experience that can be applied to tailor manufacturing software to a company’s specific needs. Driven by the shifting paradigms of the manufacturing industry, the company aims to extend the functionality of various CAD/CAM systems, allowing companies to more efficiently and easily use their resources.