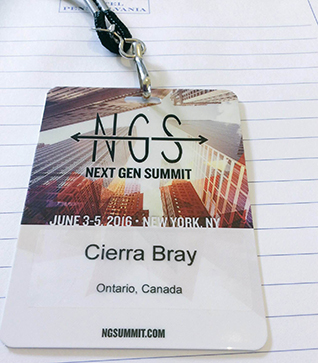 Cierra Bray, 22, is an entrepreneur and founder of a company called CGal Media. Bray provides social media marketing, event planning and media relations to organizations making a positive impact in the community.

“For me,  entrepreneurship has been the best decision I have ever made,” said Bray. “ Being accepted into the University of Windsor’s EPICentre RBC EPIC Founders Program has been a blessing and an opportunity of a lifetime.”

Bray has been building her business since May 10th and is currently working with six clients. She also had the opportunity to attend the Next Gen Summit in New York City. The Next Gen Summit is an annual conference that brings young entrepreneurs under 30 together, providing resources, networking and investing opportunities. Bray explained that her experience in New York was incredible and she was so grateful to represent Windsor and be a member of a millennial entrepreneurial movement.

“Being surrounded by youth who are doing amazing things nationally and even in Canada was overwhelming,” said Bray. “To be in the same room as an 18-year-old millionaire is inspiring and if they can do it, so can I.” 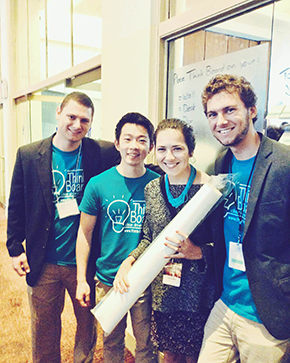 The Next Gen Summit is geared towards Americans, however Canadians are welcome to attend. According to Cierra, there were over 500 attendees, 2 dozen Venture Capitalists representing $1.6 billion in capital supporting innovative ideas, and 30 speakers talking about their best and worst entrepreneurial experiences.

“I will be going back next year,” said Bray. “Being surrounded by like-minded people and having the opportunity to make connections is so valuable.”

A week later, Bray travelled to Boston to meet two potential clients who she met in New York. She successfully signed a contract with a company called Think Board.

She expressed how exciting it is to be travelling and meeting clients outside of Windsor. “I really can’t believe that I have a client in Boston and will have another one in August,” she said with a smile. “Being an entrepreneur at 22, having clients, making a profit and travelling all at the same time is the dream, I’m so grateful to be alive.”

Bray’s goal is to sign 12 clients by the end of August. She has hired a part-time employee to help her stay organized and is excited to work with interns in the fall. She also would like to see CGal Media make $100,000 in profit by her fiscal year end in May 2017.

“Entrepreneurship is scary and you can be exposed to every negative feeling out there, but it’s rewarding when you work hard, hustle and live your passion,” said Bray.

For more information about CGal Media, visit their website at: http://www.cgalmedia.com/