Drama As A Second Language 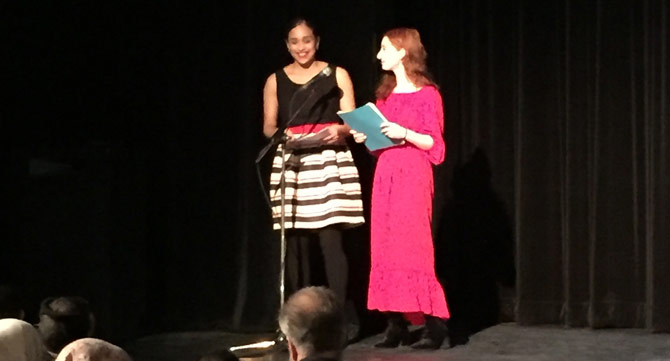 On January 18, co-founders of social enterprise Drama as a Second Language (DSL) and Founders Alumni Ashley Baez and Arielle Opler presented their final presentation of their first pilot program the DSL: After-School Program in partnership with the New Canadians’ Centre of Excellence Inc. at Capitol Theatre.

The DSL: After-School Program consisted of ten courageous newcomer youth between the ages of 13 and 18. Together, the youth performed a theatrical piece they collaboratively devised entitled “The Face of Resilience”, which aimed to start conversations amongst newcomer youth regarding their everyday challenges, and the strength they truly withhold in the face of these challenges.

The theatrical piece was created throughout the youth’s participation in the DSL: After-School Program. For several weeks, the youth engaged in ten drama education workshops focused on the theme of resilience. Throughout the program, the youth developed their English skills, built a strong sense of community, and confidence in their leadership abilities. In the questions and answers period after the performance, the youth truly testified their feelings of success and triumph after their participation in the program.

What’s next for the DSL? The DSL Team are currently working on launching their English Conversation Group program for international students in partnership with the Centre of English Language Development at the University of Windsor, and finishing up their second DSL: After School Program at Catholic Central High School.

For more information on Drama as a Second Language (DSL) and their programs, feel free to contact the team at info@dramaasasecondlanguage.com.