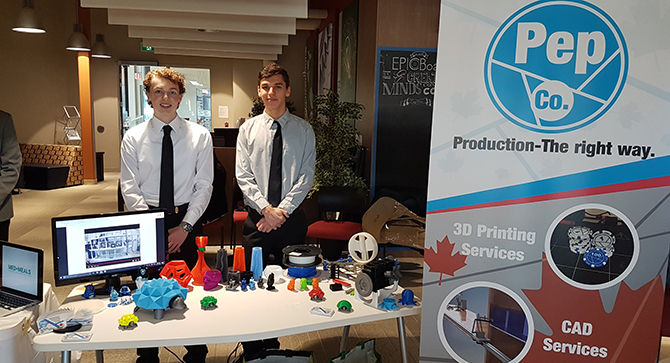 3D printing is seeing massive growth in North America and, for EPICentre member PepCo, it’s the perfect time to start a company in this growing industry! According to market research, the 3D printing market is expected to be worth $32.78 Billion by 2023. The growth is attributed to ease of development of customized products, ability to reduce overall manufacturing costs and investment in 3D printing projects for the development and deployment of technology.

The idea all began with Parker while he was still enrolled in high school. Parker got involved in 3D printing after his school purchased a 3D printer. He eventually decided to take advantage of this amazing opportunity and learned how to design the models for the printer and started making 3D prints. This was a great opportunity given that no one at the high school knew how to use the 3D Printer.

With his interest in 3D printing growing, Parker wanted his own 3D printer but couldn’t afford it so he decided to build his own. He assembled his first prototype printer and got it operating–the first major milestone for PepCo.

Ultimately, Parker’s initiative and dedication at his high school paid off. Another teacher at his school approached Parker to have him print an order of 3D-printed crosses on his custom-built printer. It was Parker’s first paying customer.

Parker came to the conclusion that he had a potential business opportunity right in front of him. He began building his second 3D printer and now has a total of 10 custom-built printers!

Initially, Parker and Zach started thinking about designing fully customizable cases for smart phones. After conducting some initial research, the team found a 3D printing hub platform (Hubs) and launched their own site on the platform. They also started refining their printing process so that they would have better quality products and increased value for customers.

Parker and Zach branded their company on the platform and landed on the name PepCo. They started selling their services and were receiving approximately six orders per week.

Eventually, a representative from a supplier for Ford contacted them. They needed a bracket for one of their automotive parts which PepCo was able to 3D print. They shipped two prototype parts and some time had passed before they heard back—but it was worth the wait. The supplier ended up placing an order for more of these parts. This was the first substantial-sized order for PepCo!

With their number of orders increasing, Parker and Zach realized that working out of their parents garage was becoming a problem. Bob Hedrick, one of EPICentre’s current incubator members, connected Parker with EPICentre and PepCo is now running their business out of the EPIC Industrial Hub in the Centre for Engineering Innovation on the University of Windsor campus.

Parker and Zach then applied for EPICentre’s EPIC Fall Founders Program, a program that helps fund student startups over the course of a semester. PepCo is now ramping up for increased sales and new clients. Currently, they are working on automation in order to enhance their printing process. They are also trying to get higher volumes of parts so they can leave the machines to their printing while they focus on other aspects of their business.

Parker and Zach are now looking at turning PepCo into a growing enterprise as a 3D printing service provider that will focus on customization. Currently, PepCo has printed a variety of different items including automotive parts, rubber parts, fabrics, medical parts for machines and, most interestingly, a 3D-printed human skull from an archaeological dig in the Czech Republic!

Stay tuned for more exciting updates on PepCo! For more information, visit their official website at: http://pepcorp.ca/ OR email info@pepcorp.ca!