Catching up with EPICentre Alumni 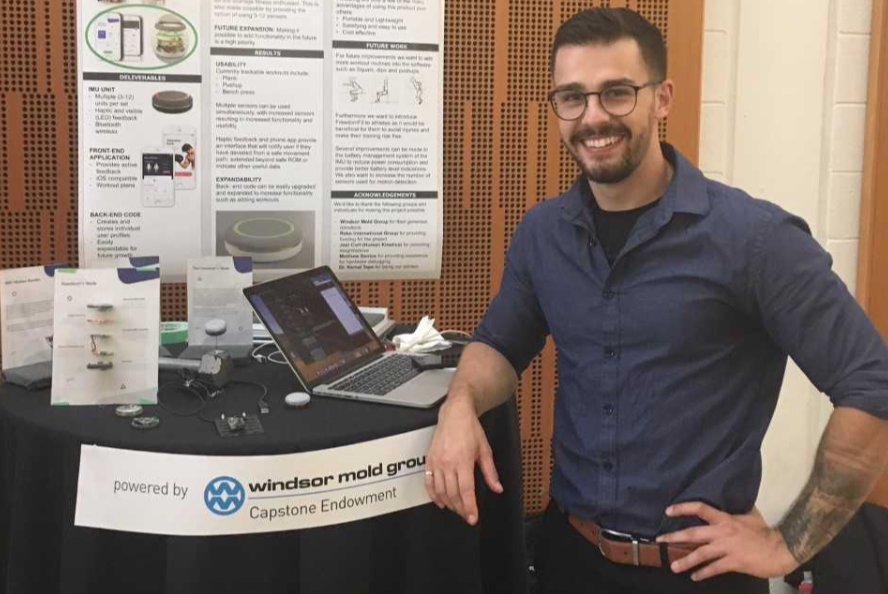 By: Wen Teoh
I met up with our alumni Connor Holowachuk last Friday at the Engineering Capstone showcase at the
Ed Lumley Centre for Engineering Innovation. Connor and his teammates’ capstone project, a fitness
movement tracker that can help prevent injuries, was an improved version of an idea he came up with
four years ago.

It was 2014 when I first met Connor Holowachuk, a first year engineering student who pitched for a spot
in EPICentre’s very first EPIC Founders Program, a 12-week accelerator program where participants
receive up to $6,000 to work full time on their business idea throughout the summer.

Connor joined the EPIC Founders Program with his startup idea called WiMP (With Motion Physics), a
device and mobile application that would utilize 3D motion tracking algorithm to enhance everyday life.
One year after completing the EPIC Founders Program, Connor joined the EPIC Incubation Program with
another idea called Eigen Ads after winning the EPIC Blue Sky Competition. Playing on the sharing
economy model, Eigen Ads was created to provide affordable advertising for small businesses while at
the same time allowing car owners to make additional income using their cars as moving advertisers.
Although Connor had a small success with Eigen Ads, he was not able to continue the business due to
lack of funding. He also needed to fulfill his co-op requirement for his degree. He went on to his co-op
terms as a junior software developer with Blackberry and GeoTab.

Connor finally graduated with his Bachelor of Electrical and Computer Engineering degree last week and
has already landed his dream job working as an Electronics Engineer & Product Designer at a Toronto
tech startup, EXACT Technologies.

When asked if he always knew what he wanted to do, Connor said, “When I first came to the University
of Windsor in 2014, I, like most first year students, found myself uncertain about the path I wanted to
take after school. I did know, however, that I loved to build things. Having explored hardware and
software development from a young age, I knew that building is where I belonged. Through that
ventures I partook during my undergrad, and through the EPICentre’s relentless support throughout the
journey, I now find myself graduating with the skills and direction I need to do what I love most: building”

Even though Connor is not pursuing his own business at this time, the experience he gained from
EPICentre was one of the experiences he loved in the past four years, “Starting your own business is an
exciting and sometimes frightening time. The mentorship, offered both from EPICentre staff and a long
list of successful local business owners, ensures that you never have to do it on your own. Along with
the mentors, EPICentre’s immersive programs also provide a clear pathway for anyone to take their “Iwish-this-existed” idea to market and make their first dollar. I strongly encourage every student, from
business to art and engineering to law, to visit EPICentre, look into the great programs offered, and
learn how you can take your idea to market.”

We wish Connor all the best in his new adventure in Toronto!