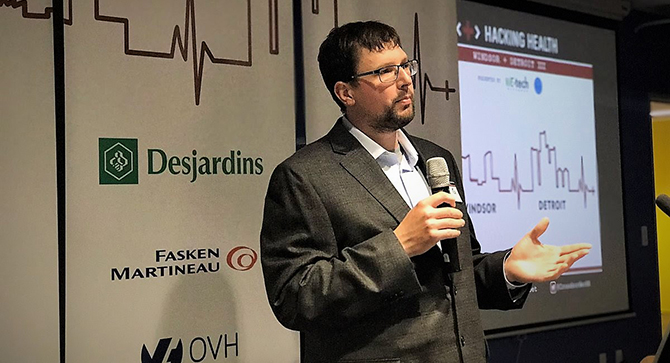 Many organizations, including universities and colleges, are constantly conducting new research and developing new inventions and innovations. In fact, there is a plethora of groundbreaking research constantly happening. But how many of these projects and ideas actually get turned into technology that can be used in the real world? ClearVoxel, a new EPICentre startup, is trying to make it easier for new medical imaging technology to be adopted by medical professionals. Yann Gagnon, a graduate of the University of Windsor’s Physics and High Technology program and one of EPICentre’s newest Incubator members, is currently starting his own company to bridge the gap between innovators and adopters. During his time at UWindsor, Yann worked in a research group on one of Dr. Roman Maev’s projects in the physics lab, exposing him to entrepreneurship in the sciences. He grew an appreciation for the role of physics and science in medicine, and in particular, in medical imaging. Yann’s entrepreneurial journey began shortly after graduating from the Medical Biophysics Ph.D program at Western University. Since 2013, Yann was an employee for a medical startup in Nova Scotia where he was responsible for the research and development of image-based orthopaedic assessments. He recently moved back to Windsor-Essex and participated in the 2017 Hacking Health Windsor-Detroit where he started discussing his ideas with individuals from various backgrounds to see if it was viable. He connected with both WEtech Alliance and EPICentre and is now working on his idea full-time as an EPIC Incubator member. After exploring the medical imaging space from an academic point of view and coming from industry, Yann really started to appreciate the gap between innovation and implementation and wanted to simplify the process. Yann and his new startup ClearVoxel are now in the process of developing a commercialization platform for new medical imaging technologies. He is hoping to bridge the gap between innovators and adopters in order to make it significantly easier to take research and innovations and turn them into real technologies that can be used in clinical care by medical practitioners. When we talk about research and innovation at a University, for example, a clear path to market the technology is not necessarily evident. Yann hopes to make it easier for innovators in these types of settings to get their new technology into the market so users in the industry will be able to adopt the technology more easily and efficiently. It’s a win-win for everyone involved. Essentially, the ClearVoxel platform will give innovators the tools they need to get their new innovations and technologies out of the lab (through the use of development tool kits, support, etc.) and integrate them into their clinical workflow. For adopters, they will need an intuitive and cohesive software application that can incorporate these new technologies. ClearVoxel plans on focusing on usability of this type of imaging software that will make it significantly easier for users to incorporate these new technologies. After conducting market research through discussions with radiologists, innovators, industry leaders and software developers, it became apparent that the current software being used makes it difficult to incorporate new innovations. Since none of the current software places emphasis on usability, Yann identified this as an opportunity. “If you give them (the users) an awesome user interface that stands up on its own with the additional layers available to incorporate new technology and innovation, then this could be a great foot in the door strategy,” said Yann about his findings. Ultimately, ClearVoxel is focused on the big picture and want to connect innovators and adopters now, with en eye to the changes coming to medical imaging in the future (artificial intelligence, big data, personalised medicine, etc.). The general sentiment is that we’re not doing enough to commercialize university research–public funds are funding these technologies so it would be beneficial to the general population to get them out to market. The innovator doesn’t always follow through on their findings and can lose influence over the speed and scope of the technology. Once the ClearVoxel platform is in place, however, it should open doors to bring new technologies that will come from new startups who are looking for a way to get into the clinical space. Stay tuned for updates on Yann’s entrepreneurial journey and, for more information on ClearVoxel, please visit their website for more information: http://clearvoxel.com/