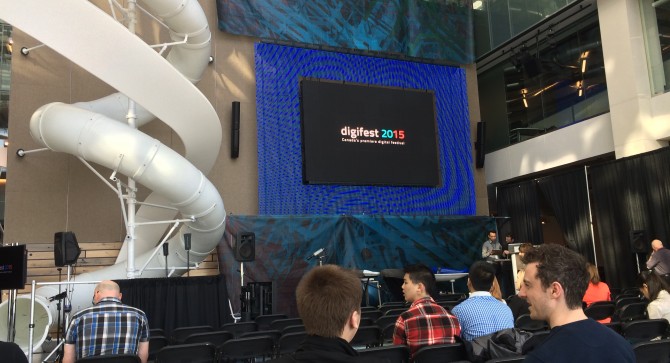 WINDSOR, ON – Digifest is Toronto’s international festival celebrating digital creativity. This year’s festival took place May 7 – 9th, 2015 at the innovative Corus Quay building on Toronto’s waterfront. Digifest showcases groundbreaking creations and trending content in digital media, art, design and technology. The festival fosters connections by bringing together industry, academics and the public, and inspires us to think about how digital tools and technology will shape our lives and our future. Digifest features the works of innovators and showcases how their creations are transforming society. The theme for Digifest 2015 was “Privacy, Money and Pleasure” in the 21st century showcasing the most innovative trends driving change today. Andrew Hlynka, showcasing his start-up video game company Dust Scratch Games was the University of Windsor’s representative at Digifest 2015. Andrew is a Masters student in the School of Computer Science at the University of Windsor. “To make the most of my time, I also try to make independent computer games and market them under Dust Scratch Games, a one-man development team”, Andrew stated. When asked how he feels about the video game industry, Andrew said that he would like to be an inspiration to others: “This competitive business is difficult to succeed in, and I have no plans to do so, but feel that the attempt itself is worth the experience when I graduate, and also hope that my unique projects inspire others.” 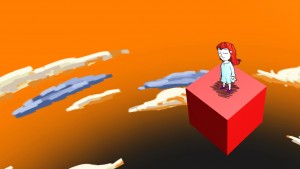 Andrew’s projects (“Drew and the Floating Labyrinth,” available now, and “Unfinished – An Artist’s Lament” coming soon) were originally 3D games, but he used 2D hand-drawn animation for its characters. Andrew loves 2D animation, and is disappointed that it largely disappeared from North American films and that graphics methods in the video game industry haven’t changed in over a decade. “My method is intuitive and simple (you just draw many perspectives from all angles of the character), but no other game has yet done this, making my work unique” says Andrew of his project. Digifest 2015 gave Andrew the opportunity to show off his work along other technology start-up companies. The trip raised a few challenges as a malfunctioning computer prevented the use of an Oculus Rift (a new virtual-reality device) for attendees to test the game, and the subsequent malfunctioning of a 22″ monitor brought as a backup. Andrew remained unfazed and creatively featured a single 13″ tablet computer to showcase his projects and allow visitors to test his games. Unfinished – An Artist’s Lament (Teaser Trailer) 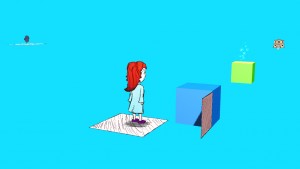 Thinking back on his experience during the start-up market segment of Digifest, Andrew was thankful that he was not the only start-up game company at the expo and that he was surrounded by other game creators, which put him at ease in an otherwise business-centric environment. “Despite my ugly setup, people seemed impressed with the unique visual style [and] nearby game developers seemed inspired to encourage their artists to see it (EXACTLY what I wanted)”, said Andrew. 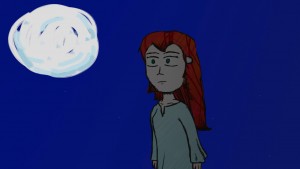 The start-up market also gave him the opportunity to be interviewed by a Canadian gaming magazine, and to see the public take an interest in the puzzle gameplay and its accessibility. There was also interest in the University of Windsor’s EPICentre and its growing initiative to promote student entrepreneurship. More importantly, the experience allowed Andrew to network and make valuable contacts in the industry: “I met some interesting groups also at the event, from non-profit groups that teach how to build things with new technologies and how to understand your computer’s security system, to innovative lighting solutions and a student’s mobile app called “FlipOff” that limits your cell-phone use each day (great name!)”. 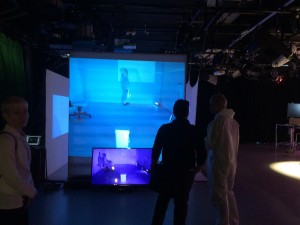 During the weekend of May 9, 2015 Andrew’s start-up was in high demand as he was registered at three consecutive events held in Toronto: DigiFest, the Toronto Comic Arts Festival and Bit Bazaar. With the assistance of three fellow University of Windsor students, Lavinia Jula from EPICentre and other volunteers, Andrew was able to maintain a display booth and be present at Digifest and the two other events. Andrew learned some good lessons from this adventure: “1) Your friends and connections are necessary to succeed, and 2) NEVER promise to be at three places at once. Of the three, the Toronto Comic Arts Festival was by far the most appropriate for my type of project and for the audience, but Digifest is varied enough that all students should consider getting involved next year” . Promotional ventures such as these are an opportunity for Andrew to participate and gain future experience of specific industry trends, both for his own knowledge and to pass it on to other students. In addition, Andrew hopes that securing a spot at digital technology conferences would encourage other University of Windsor students to take the opportunity to get involved and promote themselves and their achievements. He states that he was willing to share his display table with other UofW students to display their projects:” I promote myself as someone who likes to promote the University of Windsor”. 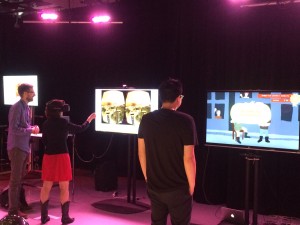 “Every day I see students that do things that impress me, but they either think they are not worth it or these events are not worth their time.” Andrew said. “I plan to continue to go to similar events (Ottawa this week, and Toronto again in June), and I hope programs like EPICentre can help other students take a similar approach. These events don’t necessarily mean bigger business, but its encouraging, great for feedback, and most of all, just plain fun!” Any University of Windsor students or start-ups looking for opportunities to promote digital entertainment-based products at future conferences and trade shows are encouraged to contact Andrew Hlynka through EPICentre by emailing epicentre@uwindsor.ca.