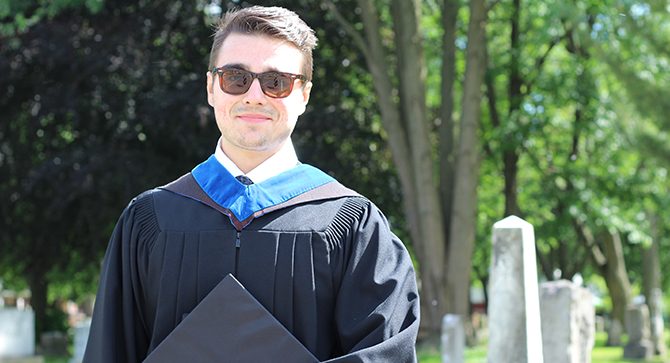 Are you intimidated by Do-It-Yourself projects? Have you started a home project that you eventually needed assistance finishing? Or maybe you just need a little guidance along the way to get started? A solution is on its way! Jesse Sheather, a recent graduate of the University of Windsor’s Business Administration (Honours) and Computer Science program, has been doing it himself for as long as he can remember. Jesse’s parents have built almost everything from scratch, including their own home. They had purchased vacant land and built the house from scratch–something that many families would never be able to do in today’s modern world. Having come from a completely self-sufficient family, Jesse firmly believes that there isn’t a project that can’t be completed. Sometimes all that’s needed is a little guidance and Jesse strongly believes that he can build anything within the right environment. During Jesse’s university career, he observed that people were hesitant to do things themselves. For example, friends of his would consider doing their own home renovations but didn’t necessarily know how to get started or were worried that they wouldn’t be able to complete the project on their own. This is what ultimately gave Jesse the idea for his startup, PROjector. Jesse ended up enrolling in the Lean Startup course at the University of Windsor in his final semester, a course which exposes students to entrepreneurship. During one of the projects in the course, Jesse was given an opportunity to talk to homeowners and he realized from these discussions that people were generally hesitant to start a do-it-yourself project. He also collected information about how much homeowners would be willing to spend to obtain instant advice from an experienced expert to complete a home project. Ultimately, Jesse decided that he needed to explore his idea further, leading him to apply to EPICentre’s RBC EPIC Founders Program. He has since been conducting market research and developing his PROjector platform. In it’s simplest form, PROjector is a mobile platform that allows any individual to seek out experts instantly with respect to a do-it-yourself project. It allows for people to connect one-on-one via any device through both video and chat. For example, if you wanted to add moulding to a room in your home, you might have a lot of questions about how to correctly perform this task, especially if you have never done it before. PROjector would allow for individuals to reach out to professionals who have experience doing this type of work and will be able to get expert advice, instantly. Ultimately, this will give consumers more confidence in their abilities to take on their own projects. The platform is a great tool that benefits both professionals and individuals working on a project. The experts available on the platform will have the ability to set their own rates and can offer various pricing for their services while consumers can set their budget to screen out experts who might be charging too much. The platform will also feature a vetting process for experts in order to verify their credentials as well as a rating system for users to review the experts they interact with. Another feature will allow users to search for professionals based on their language of choice (as well as other characteristics such as education, experience, certifications, etc). This would allow individuals to search for professionals based on the language they are most fluent. Users will also be able to select their learning style since some people learn better from a more visual method while others would benefit more from written instructions. “I believe that people can help each other and we just need the right opportunities and platforms to make that happen,” said Jesse about his startup idea. Jesse is currently in the development stage of his platform, which will be available on Android, iOS and the web. He is currently planning for a first launch in the fall. Stay tuned for more updates on Jesse’s entrepreneurial journey as he continues to develop and refine his platform. If you’re interested in learning more about PROjector, please visit their Instagram page for updates: https://www.instagram.com/projectorassistance/ You can also contact Jesse directly at: jsheather@projectorapp.ca.